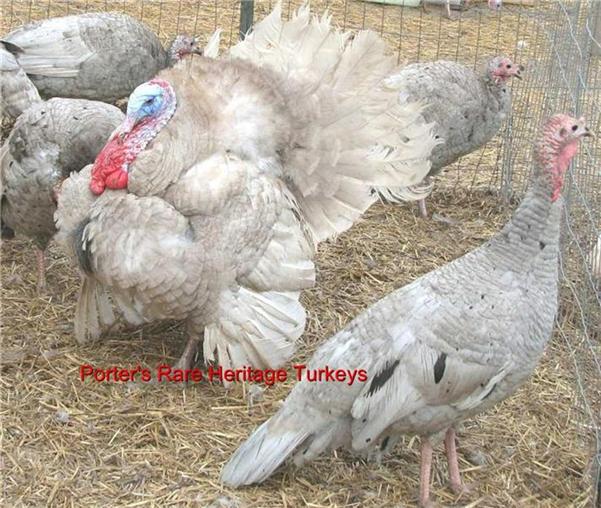 This variety is very interesting, and I will attempt to explain what can happen in breeding this color. First, I will try to define each color that occurs.

A Slate, is black based with a single dominant slate gene.      (Genotype: BBDd)

They are commonly called blue slate, sometimes called a Splash, their phenotype is slate or ashy blue with specks of black scattered over the feathers. The Self Blue "aka Lavender" is also black based but have two dominant slate genes.(Genotype:BBDD), they are more of a solid, dull, grayish-blue with the hens a lighter bluish gray. The Black (Genotype:BBdd)is just that, black.

Just want to make an important note here that most of the information found on some of the more popular websites on the results of breeding blue turkeys is inaccurate, the following is the correct results .

When breeding Slate to Slate, the results are turkeys of three different colors, Slate,Self Blue and Black.

When breeding Self Blue to Self Blue, only Self Blues result.

When breeding Self Blue to Black, only slates result.

When breeding Slate to Black both slates and blacks result, with no self blues.

When breeding Self Blue to Slate both Slates and Self Blues result, with no blacks.

Here's some additional info. on the history of the slate by Franklin Albertsen:

The nature of the slate gene is to change black pigment in the feathers to grey (even though Standards prefer the more colorful terms of slatey-blue or even steel-blue). Non-slate simply allows the black color to show in
full, normal intensity. However, to complicate matters, complete dominance does not really occur in most turkey genes, and heterozygotes ( a single dose of a given gene) often create an effect somewhere in between, With slates we get an additive dilution effect with a homozygous slate ( carrying 2 doses) being much lighter than a heterozygote.

From the time the Standard was written up through the 40's, turkeys
which approached "accepted" exhibition ideals tended to be heterozygous.
Breeders at that time simply sorted poults by down and kept a select group for development and sold the rest. As scientists studied the genetics of slate - - Ghigi and Taibel in Italy (1929 & 1933), Walther, Hauschildt, & Prufer in Germany (1933), Jaap (1933) Marsden & Martin (1939), Jaap and Milby (1943), etc. - - it was noted that the basic color pattern of a given turkey modified the expression of grey (slate) in the plumage.

Up to this era, most grey (slate) turkeys shown were on a bronze
base, which is essentially an arrangement of mostly brown and black pigments. In areas where black is absent, the replacing color may be varying shades of yellow, reddish-tan, and brown; or even silvery-white to white, depending on what other genes are affecting the color pattern. In general, the grey (slate) does not replace the yellowish-brown or silvery-white of the basic plumage color. Therefore, brownish ("dirty") tints usually occur when the basic color pattern is bronze. As a result, slates on such a basis are not as free from objectionable color tones.

Slate poults on a bronze base with a single dose ( 1 dose) of slate
have the brownish striped pattern of the Bronze clearly marked on a dark grey background.
At maturity, when intermated these dark greys or slates ( as the old
breeders called them) will segregate into 1 bronze : 2 dark slates ( like
themselves) : 1 lighter slate grey. In the past, breeders would sort them at hatch and could correctly classify without error over a 1000 at a time as to future adult colors.

Slate poults on a bronze base homozygous pure for slate ( 2 genes)
strongly resemble white poults with the creamy white down replaced by a pale grey. The head is always light tan. Rarely, faint tan stripes ( similar to the stripes of a bronze) will be observed. They are the last category (light slate grey) that segregated out in the above example. Often, certain regions of the wings and tail feathers are nearly white on mature birds. Either of these two types (slates on a bronze base) were called slates or greys by the old breeders and usually further split into lights and darks.

As the results of the scientists were disseminated, efforts were
pushed to develop slate turkeys of a more even tone, free of the "muddy"
or "dirty" appearing brownish tones. One has to remember, that during this era, scientists and breeders worked hand-in-hand. The Standard breeders supplied the scientists with their birds and shared information freely. No one else even cared about it.

Once it had been determined that the grey (slate) gene really only
had much of an effect on black pigment, a movement emerged in which the bronze base slates were crossed with black turkeys. The resulting poults had the characteristic down pattern of black poults. The head and face ("mask"), and sometimes the wing tips, are at least partly creamy white; which is always sharply separated from the grey down of the adjacent areas. These poults are usually "splattered" with small randomly scattered spots of intense blue approaching black. If the original slate parents carried only a single dose of grey (slate), an equal number of black poults occurred in this initial cross.

At maturity, these new slates had black flecks throughout the
plumage. These flecks varied in size; and in some cases an entire feather was black. Breeders liked this "rich grey" appearance of these new slates on a black base and called them "blues" or "blue splashes". And then the confusion really started because many breeders also bred chickens. In chickens, blue refers to a heterozygous
blue, and splash to a washed-out, splotchy homozygous light colored
bird. But in turkeys they started calling the heterozygous bird blue splash.
Regardless, breeders disliked the black flecks.

When these blue splashes were intermated; blacks, bronzes, dark and
light bronze-base slates (striped down), and blue splash and an even
lighter blue (w/face masks) segregated out. These light black base slates were a very uniform pale bluish grey free of any flecks in the down. hence the name, "blues". However, these individuals when mature were somewhat paler in color than what appears to have been desired in the Standard at that time. The hens were particularly attractive with a uniform grey color with the faint white edging on the breast
feathers. "Pearl grey" may have been a more appropriate choice of
words? ? ?

The toms were not (and are not) as pleasing in appearance. A dark
edging on the feathers sometimes created an uneven, blotchy appearance, even though they were free of the flecks of the heterozygous blue splashes. Some toms were more uniform than others, and careful selection for many years by the dedicated old breeders for, or against, minor modifying factors successfully produced more uniformily colored blue strains. These lighter colored clear feathered strains bred true. About this time Marsden and Martins book stimulated the switch from bronze base to black base slates to fit the Standard, but in those early editions they described the Standard slates and these new blues separately while suggesting the blue would be an acceptable show slate.